The coaching staff and the team manager of Kolossos Rodou B.C. had the pleasure to visit Trace ‘N Chase recently, discovering the world of trading cards and memorabilia while talking about the team’s goals this year. Kolossos is currently 7th in the standings of the Greek Basket League with a strong chance to enter the playoffs of the league for the first time since the 2017-18 season.

Head coach Ilias Kantzouris began his coaching career in 2000 as an assistant with Apollon Patras B.C. of the Greek Basket League and then moved on to Near East B.C., Sporting B.C., Aris Thessaloniki B.C., AEK Athens and Panellinios before agreeing to become the assistant coach of Zalgiris Kaunas of Lithuania in the 2011–12 season and of UNICS Kazan of the Russian VTB League in the 2013–14 season. The next stop was with  the German League club Brose Bamberg from 2014 until 2018 where he won 3 German League Championships, 1 German Cup and 1 Super Cup while participating in the EuroLeague’s Top-16 a couple times. He then returned back to Greece as an assistant coach for AEK B.C. before becoming the head coach of Iraklis B.C. in January of 2020 and then moving on to Kolossos Rodou B.C. this season.

Assistant coach Giorgos Sigalas meanwhile is one of the most succesfull Greek players of modern Greek Basketball, having won five consecutive Greek League championships with Olympiacos B.C. from 1993 to 1997, together with two Greek Cup titles, all while serving as the team’s captain. In 1997, Sigalas won the European basketball Triple Crown, meaning his team won the Greek League championship, the Greek Cup title, and also the European-wide top-tier level EuroLeague championship, all in the same season. He then moved on to play in Italy with Olimpia Milano, before returning to the Greek League the following year, to play first with Aris B.C. and then PAOK B.C., followed by short stints in the Spanish League with Granada, in the Italian League with Viola Reggio Calabria and finally with Makedonikos, Panionios and again with Aris B.C. until his retirement in 2007. A 7× Greek All-Star, he left his mark as a tough-nosed defender, nicknamed “Rambo”, after going against the likes of Nick Galis, Dominique Wilkins, Peja Stojakovic and many more while playing in Greece. 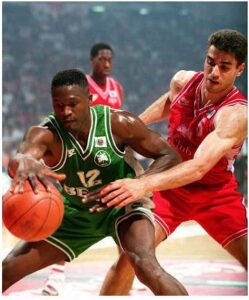 Sigalas was also the long-time captain of the senior men’s Greek national team, playing in 185 games, competing in six consecutive EuroBaskets (from 1993 to 2003), as well as in the 1994 FIBA World Championship, the 1998 FIBA World Championship and the 1996 Summer Olympic Games. He has worked as a basketball coach for the Greek Under-20 national team while in January of 2020, he was named the assistant coach of Ilias Kantzouris for Iraklis B.C., following him to his next gig with Kolossos Rodou.

Assistant coach Giannis Georgallis began his professional career in 2000 with the Greek club Apollon Patras B.C. in the Division I of the Greek Basketball League and then moved on to Panellinios B.C., Panionios B.C. and Kolossos Rodou where he became the team captain in 2015 and played for four more seasons before announcing his retirement in 2019. He has won the silver medal at the 1999 FIBA Europe Under-16 Championship, and the gold medal at the 2002 FIBA Europe Under-20 Championship, as a member of the Greek junior national basketball team, while he also won the silver medal at the 2005 Mediterranean Games, playing with Greece’s under-26 national selection.

Finally, Trace ‘N Chase wants to thank Team Manager George Gotzogiannis for orchestrating the visit of Kolossos. Gotzogiannis has been with Kolossos since the 2011-2012 season while as an athlete, he had a succesfull career playing for Esperos Kallitheas, Ilisiakos B.C., Sporting B.C., Pagrati B.C. and Cephalonia, before retiring in 2010 season with the team of Kronos B.C.