The Trace ‘N Chase team had the pleasure to spend some time with the Grant brothers a few weeks ago, as Jerai and Jerian Grant are fulfilling their childhood dream of playing together for Promitheas Patras B.C. of the Greek Basket League this year.

In his four-year career at Clemson, Jerai played 127 games (63 starts) while averaging 6.7 points, 4.3 rebounds and 1.6 blocks in 17.9 minutes per game. As a senior in 2010–11, he was named to the ACC All-Defensive team and earned honorable mention All-ACC honors. After going undrafted in the 2011 NBA Draft, he signed with the Sydney Kings of the Australian NBL where he posted 11.9 points, 8.1 rebounds and 1.1 assists in 28 games. A brief stop with the Houston Rockets for the 2012 NBA Summer League followed before he signed with Enel Brindisi of Italy for the 2012–13 season. Jerai found his Ithaca with BK Ventspils of the Latvian Basketball League where in his first year and in 22 league games, he averaged 11.7 points and 5.5 rebounds per game, helping the team win the 2013–14 league championship; Lithuania and Neptūnas was the next stop, with the team reaching the LKL finals for the second time in club history and having a very solid Eurocup Basketball campaign, reaching the Top-16 phase. Stops with Orasi Ravenna Basket of Italian Serie A2 Basket in 2017 and the Trotamundos de Carabobo of Venezuelan Liga Profesional de Baloncesto followed before returning  to Neptūnas in 2018 and playing in the French LNB Pro A with SIG Strasbourg and in Greece with AEK B.C. in 2019. After a quick stop in Israel with with Maccabi Haifa of the Israeli league and with Manama Club in Bahrain, he returned to Greece to play for Promitheas Patras of the Greek Basket League, with him averaging 12.4 points and 5.3 rebounds in 18 regular season games. Promitheas has been the Cinderella story of Greek Basket League in the last couple seasons, with the team currently playing against AEK B.C. for the 3rd place in the Championship. 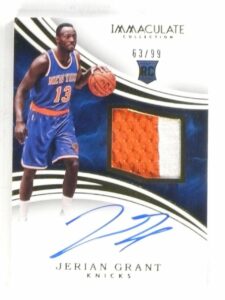 Jerian Grant meanwhile played college basketball with the University of Notre Dame and was considered one of the top college players in the nation for the 2014–15 season. He was selected as the 19th overall pick by the Wizards in the 2015 NBA draft with his rights being traded to the Knicks. He was traded along with José Calderón and Robin Lopez, to the Bulls in exchange for Derrick Rose in 2016 and he helped the Bulls win the 2016 Las Vegas Summer League championship game, earning MVP honors. Grant was traded to the Magic in a three-team deal on June 30th 2019, followed by short stops with theWizards and the Rockets. On December 31, 2020, Promitheas Patras announced that they had signed Jerian Grant who would be joining his older brother Jerai. 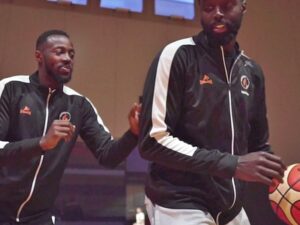 The Grant brothers are the sons of Harvey Grant who played college basketball at Clemson and Oklahoma, and was the 12th overall pick in the 1988 NBA draft, going on to play for 11 years in the NBA with Washington (Bullets and Wizards), Portland and Philadelphia. Grant’s uncle, Horace (twin brother of Harvey) meanwhile played college basketball at Clemson and was a four-time NBA champion with the Bulls and the Lakers.

Trace ‘N Chase created a cool family card collectible for Jerai and Jerian, a set that included their brother Jerami Grant, their dad Harvey Grant and their uncle Horace!