Vangelis Angelou, a former professional basketball player and currently a coach with AEK B.C., stopped by at Trace N’ Chase recently to talk about the importance of communication in today’s game.
Angelou has a long tracking record as a point guard with Apollon Patras B.C., Olympiacos B.C., Panionios B.C. and Iraklis B.C., scoring 1,782 points in 254 games played in the Greek League and participating in the FIBA Korac Cup with Olympiacos and Panionios and in the EuroLeague with Iraklis.
He began his coaching career with AGEH Gymnastikos B.C. where he stayed from 1996 until 2002, leading the club from the lower categories of Greek basketball up to the Greek 2nd Division. He then worked as an assistant coach under Milan Minić at Aris in the 2002–03 season and moved to Maroussi B.C. where he was an assistant coach under legendary player Panagiotis Giannakis from 2003–2005. After another successful run, he moved to Dynamo Moscow, where he reunited with longtime Serbian coach Dušan Ivković’s from 2005 until 2007. He was named the head coach of AEK B.C on November 7th 2007, and remained the team’s head coach for the 2007–08 season, before becoming the head coach of Trikala B.C. in the 2008–09 season and serving once again as Ivković’s assistant, this time at Olympiacos, from 2010 until 2012. He took over Aris B.C. in 2012 and then moved to Turkey and Anadolu  Efes S.K. in December of 2013, remaining as an assistant with Efes until 2016 before returning to Greece to coach Promitheas Patras B.C., Aris B.C., Larissa B.C., Ionikos Nikaias B.C. and AEK B.C. as of recently.

Angelou has been instrumental in the development of Greek players like Vangelis Mantzaris, Kostas Sloukas, Kostas Papanikolaou, Dimitris Katsivelis and Giannis Athinaiou, putting a lot of emphasis in empowering his players. A vastly experienced coach, Angelou won the EuroLeague and the Greek championship with Olympiakos in 2012, 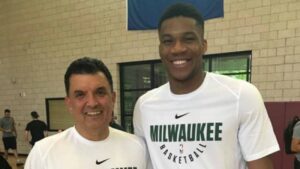 the EuroCup with Dynamo Moscow in 2006 and the Greek Cup, again with Olympiacos in 2011, while he was a member of the Milwaukee Bucks staff during the NBA Summer League in Las Vegas in 2018.
AEK is currently facing Panathinaikos B.C. in the semifinals of the Greek Basketball League, with Promitheas of Patra and G.S. Lavrio B.C. squaring off on the other side of the bracket.