A strong class overall with as many as five franchise players projected to go into the lottery and a ton of good role players, the 2021 NBA Draft took place in Brooklyn on Thursday.

Here is the complete breakdown with the relative information on the preliminary projections for every player that was drafted in the 1st Round based on what we’ve seen and know so far: 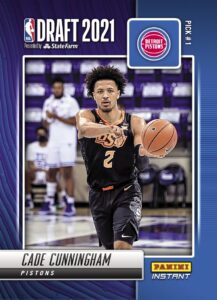 Cunningham possesses the frame of a forward with a skill set of a guard and he looks about as safe as it gets for heavy production out of the gate! 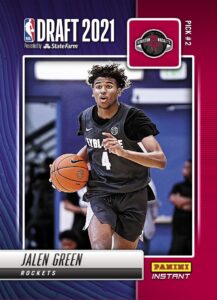 Green has immense scoring potential but figures to go through some growing pains as he learns to rein in all of his athleticism; a stud who will bring a ton of highlights to NBA fans all over the world! 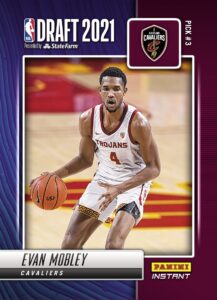 A polished big on the defensive end as a rim protector, he shows flashes of massive two-way upside and has impressive ball handling skills for a big with his size.

No. 4 Scottie Barnes (F) to the Raptors 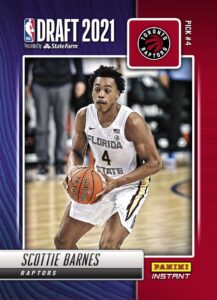 Fans probably should never expect Barnes to become a big-time scorer, or even an exceptional 3-point option, but his hustle and versatility could turn him into the sort of a glue guy that chips in everywhere else across the box. Like Patrick Williams, who also went no. 4 last year, Barnes won ACC Sixth Man of the Year with Florida State. 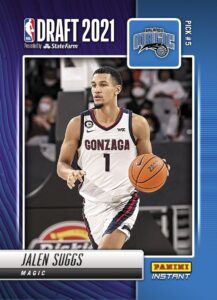 Suggs’ polish and intangible skills will make him one of the higher-floor players in the class, and he’s liable to emerge with plenty of minutes from the jump as a result. 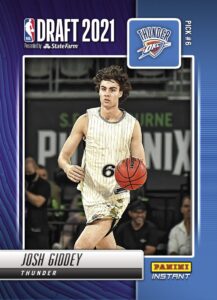 A top-class passer with excellent vision and understanding of how to thread the needle, the Thunder decided to swing for the fences making him a high lottery pick even though he hasn’t played at the highest level yet .

No. 7 Jonathan Kuminga (F) to the Warriors 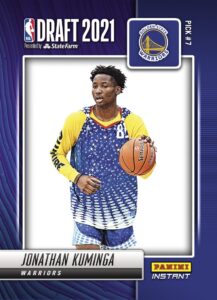 An athletic wing with outstanding physical tools, he probably has the biggest upside of the entire draft class.

No. 8 Franz Wagner to the Magic 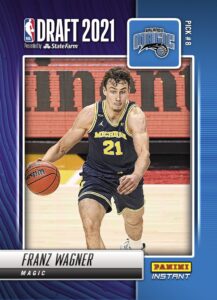 Versatility is the name of the game with Wagner, who can slot into different roles on both sides of the floor. He may never be a go-to scorer but does a little bit of a lot thanks to an outstanding feel for the game. Wagner doesn’t boast superstar potential but looks like a solid glue guy.

No. 9 Davion Mitchell (G) to the Kings 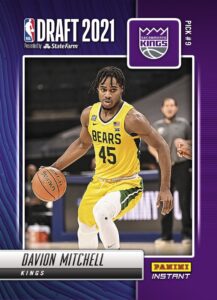 Mitchell is an older prospect and may have less of a ceiling as a result, but his playmaking and defense are skills that should get him on the floor early. 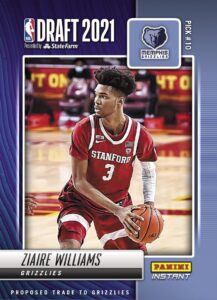 Williams is a score-first athletic wing who can pass a bit, but how all of his raw skills carry over will likely depend on his development environment.

No. 11 James Bouknight (SG) to the Hornets 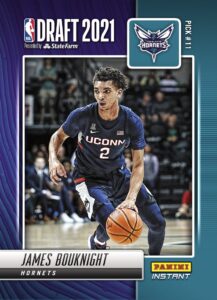 Bouknight’s a fabulous finisher who can heat up in an instant, though he’s far more comfortable creating his own shot than being stationary and playing off a lead ball-handler 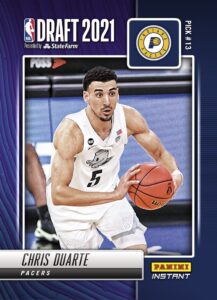 Duarte is one of the older prospects in the draft class but also boasts a track record as a knockdown shooter, culminating in a .424 mark from distance last year. 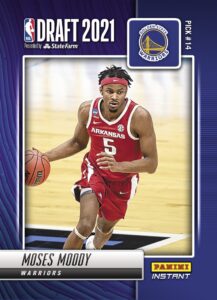 A 6’6” wing with a plus wingspan, Moody uses size and length to be disruptive on the defensive end and is good at many things with a ceiling that’s unknown, but it certainly looks like he’ll have a steady NBA job for years.

No. 15 Corey Kispert (SF) to the Wizards 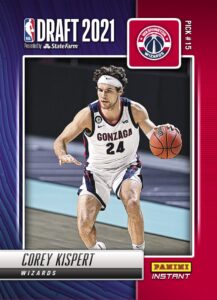 Kispert’s 3-point ability is his standout quality and he’s got the potential to be a plus contributor in the efficiency categories. 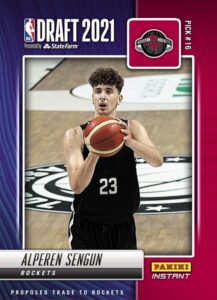 No. 16 Alperen Sengun (PF) to the Thunder (officially traded to Rockets)

Sengun came into the season with a lot of questions about whether he is a legit prospect but after playing is 37 games in a solid league he was named the MVP of the regular season in Turkey and his stock has risen. His numbers seem to have been inflated and he is not a great athlete whose body needs some work but he is a smart kid, great in pick-and-roll action and has shown the ability to dominate in the middle.

No. 17 Trey Murphy (SF) to the Grizzlies (officially traded 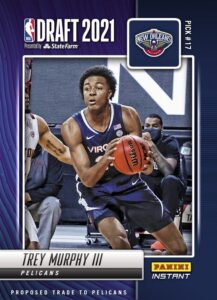 Murphy’s shaping up as an efficient 3-and-D wing who makes the most of low usage. He’s got an easy, smooth release and has deep range on his shot which could help him earn minutes stretching the floor. 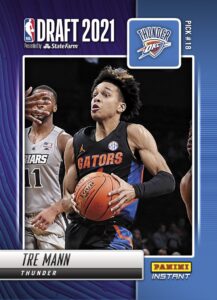 Tre can seriously space the floor with unlimited shooting range and the swagger to match and he looks like he could become a microwave scorer but there’s definitely upside beyond that.

No. 19 Kai Jones (PF/C) to the Knicks (reportedly traded to 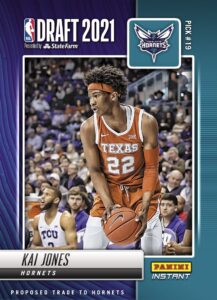 There’s boom-or-bust potential here as Jones is going to need to balance adding strength without losing quickness, but he also offers 3-point upside and can hang on the perimeter, if not in the paint. He’s one of the riskier bets among the “top” prospects in the class.

A standout playmaker from the forward spot, Johnson doesn’t have a ton of offensive skill with a poor shooting track record but he has the looks of a major contributor if he can really lean into pumping out defensive stats and crashing the glass. 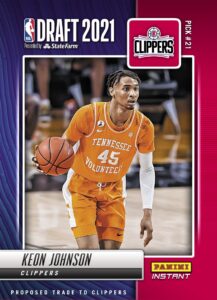 No. 21 Keon Johnson (SG) to the Knicks (officially traded to
Clippers)

Johnson’s an extremely raw player who relies on explosiveness more than anything. The fact that he’s able to impress while currently living on drives and mid-rangers suggests long-term scoring upside.

No. 22 Isaiah Jackson (PF) to the Lakers  (reportedly traded to 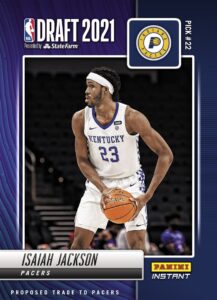 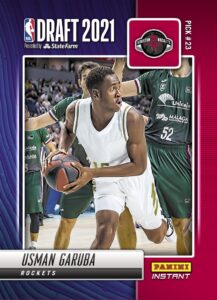 Garuba is one of the draft’s more intriguing players as someone who can make immediate waves on defense with a relatively cloudy outlook on the opposite end of the floor.

No. 24 Josh Christopher (SG) to the Rockets

An elite athlete with excellent handles he is not a primary playmaker but could definitely be a secondary playmaker.

No. 25 Quentin Grimes (G) to the Clippers (officially traded to 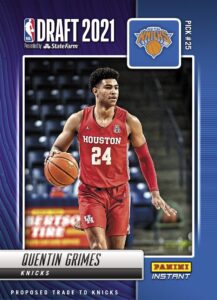 Such a Thibs pick, Grimes is a unique player given his combo of strengths and weaknesses. He put up big 3-point numbers on massive volume last season but shot under 39% inside the arc. He’s a decent rebounder but turns the ball over just as frequently as he drops dimes. 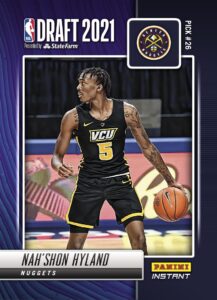 A skilled guard with unbelievable shooting range, Hyland looks like a decent bet as someone who scored efficiently on big volume and the Nuggets nailed another one deep draft pick in recent years . 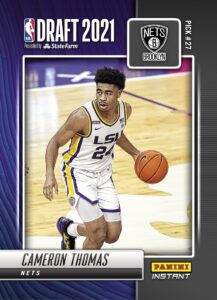 A score-first guard who can step in immediately as a bench sparkplug, the Nets get a prefect complimentary guy for their big-3. 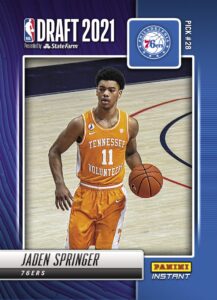 Springer won’t wow anybody, especially given his lacking ability to create shots, but is just one of those players that makes all the right plays at the right time.

No. 29 Day’Ron Sharpe (PF) to the Suns (reportedly traded 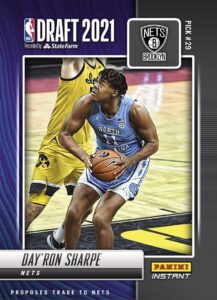 Sharpe is going to make his money down low as a total non-shooter with limited reasons for optimism (.505 at the line last year). He is an instinctive, agile defender and looks like a potential asset as a roll-man.

No. 30 Santi Aldama (PF/C) to the Jazz (reportedly traded to the Grizzlies)

A player that I was lucky enough to watch a couple summers ago and once thought to be Spain’s next best thing, Santi Aldam led his national team to the FIBA U-18 European Championship, averaging 18.0 points, 7.6 rebounds, 2.6 assists, 2.3 blocks and 1.9 steals, while being named the tournament’s Most Valuable Player. He played for the Loyola Greyhounds and he is a dynamic two-way stretch big who lacks the strength for the next level but is somewhat of a dark horse.

Thank you for reading our NBA Draft special and keep up with all products, blog posts and news posted on our website.

END_OF_DOCUMENT_TOKEN_TO_BE_REPLACED

“The Show” with George Aivazoglou, Head of Fan Engagement & DTC in Europe & Middle East for the NBA

END_OF_DOCUMENT_TOKEN_TO_BE_REPLACED

Most Improved Player of the Year Race: Six NBA players that have seen their game skyrocket to the next level!