Understanding how and why to grade a sports card can be an invaluable tool for both new collectors and grizzled veterans of the hobby.

Card grading is the practice of submitting a trading card to a third-party service. The card is inspected for authenticity and ranked, usually on a 10-point scale, for the condition. The card is then assigned an overall grade, sealed in a tamper-proof holder and, finally, assigned a cataloged serial number.

The benefits of card grading include indisputable provenance of authenticity, no subjective condition assignments and an accountability system through an online database. All of these factors combine to, more often than not, increase the value of the card when compared to an ungraded card in equal or similar condition.

In addition to the companies mentioned above, the marketplace has seen several other grading companies come and go over the years. Plenty of their cards still exist on the secondary market. These include Global Authenticators International (GAI), Card Collector Services (CCS), and Sports Collectors Digest (SCD), to name a few.

When grading became popular in the early- to mid-’90s, new grading companies sprouted up in unprecedented quantities. Some earned very poor reputations. While smaller, and less well-known companies exist, it is strongly advised that collectors only trust their collection to those first mentioned: PSA, BGS and SCG. Those are the companies with the best reputation in the hobby.

Fees between the companies vary so collectors are encouraged to see the pricing policies listed on their respective websites. Collectors can also pay for different levels of service. 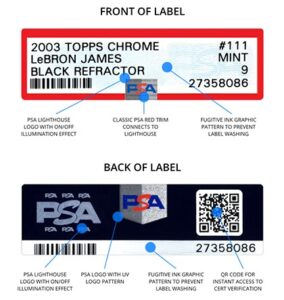 The Cost of Card Grading

As mentioned earlier, exact fees differ among card grading companies, however they all charge based on the following criteria:

Also, keep in mind that you are required to pay two-way shipping. When sending to the company, pay for the appropriate amount of insurance, delivery and signature confirmation. For return shipping, each company will have their own established fee structure. This usually includes insurance.

The Specifics of Card Grading

Before submitting anything to a card grading company, there are a few things to be aware of to get the most out of your grading submission:

Choosing what cards to grade is a personal and subjective decision. But there are some guidelines to follow that will not only save you money, but also increase the value of your collection.

For example, grading any one-of-one card makes little sense from a financial standpoint, although people continue to do so. The cost of having the card shipped, graded, insured and returned is unlikely to increase the worth of an already highly valued card enough to offset those costs. However, some collectors may like the added protection of a graded slab.

Submitting vintage cards for grading, in particular, makes for a solid investment. Player collectors, team collectors and set builders often target cards in a specific grade. Removing the subjectivity of self-assessment provides a foolproof way of making sure a card is actually in the condition the owner claims.

Even vintage commons can bring a strong return if submitted to a reputable card grading company. A mistake many collectors make with older cards is overlooking these commons. Many high-end set builders will often pay top-dollar for that graded NM or Mint backup utility infielder’s card simply to complete their collection of graded cards.

Modern prospect and rookie autographs are also highly desirable in high-grade condition. The obvious reason is that, if that player attains star status, their most popular rookie cards will always be those that are signed and in Mint condition.

Cards are graded based on these four factors: Centering, Corners, Edges, and Surface.

They give each attribute a grade of 1-10, then combine those to give the card a final grade of 1-10. Anything above a 9 is worth book value or greater, as BGS 9 (known as a “Mint 9”) is the condition expected of the card out of the pack. A grade of 9.5 is Gem-Mint, which is a card that is nearly flawless. This is the condition most collectors want. Then there is a “PRISTINE 10” which is the holy grail of cardboard. Pristine 10s are rarely handed out. A Pristine 10 can turn a $10 card into a $1,000 one.

Centering: Centering is basically the width of the border. Ideally, the border sizing should be equal on the left, right, top and bottom. Sometimes judging the centering won’t be as simple as looking for equal spaced borders. The bottom line is that the card should feel balanced. If a card appears lopsided, this means the centering is off.

Corners: This is arguably the most important and most scrutinized of the grading attributes. A card with four sharp corners can alleviate other concerns, especially on older cards. Study all four corners looking at the front of the card first, then look at the back of the card. This is the best way to double-check. If a corner shows imperfections on both sides, it’s not your eyes playing tricks on you. Sometimes the ink, foil or other factors can create the illusion of a weak corner, so always be sure to check the back. If a corner or two is an eyesore to look at, your probably looking at a card that will grade under 8.5. Slight corner imperfections, such as barely visible white might be the difference between a BGS 9 and a BGS 9.5, but can also result in no change.

Edges: The four edges of a card are important, as well. Some brands are notoriously terrible with edges, especially cards with dark or black borders. At the same time, less is expected from these, so lower your expectations. Graders also look at the back for this, too. Edges should be sharp and the color should be constant. Imperfect edges have dings, dents or subtle discolorations. As with corners, barely visible white isn’t the end of the world.

Surface: Surface is the condition of the cardboard as a whole. With glossy cards such as Bowman Chrome, scratches on the surface can be an issue, as well as faded autographs. In addition, cards made with foil stock are prone to small pieces of foil coming off, leaving white specks on the card. With older cards, the main concern is creases and moisture damage. Many 1980s cards suffer from ink smearing and stamp marks that happen when the card goes through a print press. Many times a crease is hard to notice at first, as the picture on a card can hide one very well.

Autographs: The autograph grade has nothing to do with the grade given to the card itself. If the ink isn’t smeared and the autograph isn’t faded, it will normally be a 10. All graded autographs must be “out of pack” autos (not hand-signed or in-person). It is very easy to “eye grade” an autograph.

Although the grading process may technically be scientific, learning how to look at a card has more to do with your gut reaction. If a card looks great, it looks great. There’s a thin line between having high expectations for condition and being paranoid about perfection.

Qualifier: Condition issues that would otherwise render a card with a specific grade on its own merit.

Off-Center (OC): When the centering of a card falls below the minimum standard for that grade it is designated as “OC”.

Stained/Staining (ST): Cards with staining below the minimum standard for the grade are designated “ST”.

Out of Focus (OF): Cards with the focus of the photograph below the minimum standard are designated “OF”.

Marks (MK): Cards with writing, ink or pencil marks, or evidence of an impression left from having been written on are designated “MK”.

Miscut (MC): Cards that are cut in any manner in that they do not meet the standard dimension for that particular set will be considered to be “MC”. 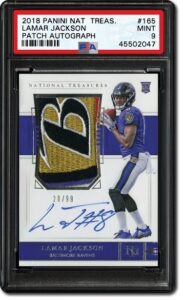 What to Do When You Can’t See a Card in Person?

The hardest and riskiest way to buy a card is when you can’t see it in person. If the scan of the card you wish to buy seems to be hiding something or doesn’t offer an accurate or visible picture, it’s time to close your eyes and type. Simply ask the seller questions to help clear up anything you aren’t certain about. A few sample questions are shown below.

Are all 4 corners sharp?

Are there any noticeable imperfections?

Now You’re Ready To Practice “The Eye of Collector”