“The Show” with Soulis and Haris Markopoulos

FIBA Korać Cup champion (1994) and 2× Greek League Best Coach (2008, 2014) Soulis Markopoulos is featured in a very special episode of “The Show”, together with his son Charis, a former basketball standout and current assistant coach for the Beijing Shougang Ducks of the CBA.

Subscribe to our channel and watch the full interview here:

Soulis Markopoulos played basketball with the Greek clubs Olympos Saranta Ekklision and Dimokritos before quickly turning into coaching, where in the last 20 years he has managed teams like Iraklis B.C., PAOK B.C., Aris B.C., Makedonikos, AEK B.C., and Maroussi. His most remarkable success was winning the FIBA Korać Cup title, while with PAOK Bravo in the 1993–94 season.
He was named the Greek League Best Coach in 2008 and in 2014 and has coached the most games in the history of the league (706), while standing 3rd in total wins behind only Giannis Ioannidis and Željko Obradović.

Haris Markopoulos meanwhile grew up playing basketball from an early age becoming somewhat of a wonder-kid as a teenager and bombarding opponents with 50 and 60-point games on a regular basis. Having won the Greek U-18 Championship during the 1997-98 season playing along Lazaros Papadopoulos for Iraklis B.C., he was promoted to the men’s team on a roster that featured legendary Greek guard Dimitris Diamantidis and big man Sophocles Schortsanitis.

He won the Gold medal in the World Schools Championship Basketball held in Israel in 1999 playing alongside Greek guard Nikos Zisis and was a member of all junior national teams of Greece. He won the bronze medal at the 2000 FIBA Europe U-18 Championship where he averaged 13.6 points, 5.1 rebounds, and 4.5 assists per game, playing alongside Vasilis Spanoulis and Nikos Zissis at the tournament, as well as the silver medal at the 2000 Albert Schweitzer Tournament where he was the MVP of the tournament while earning All-Tournament Team Honors.

Markopoulos played professional basketball at the Greek top-tier level Greek Basket League with Iraklis B.C., Makedonikos, and PAOK B.C.. As a member of Iraklis he had the opportunity to participate in the European 2nd-tier level, the FIBA Saporta Cup competition, and in the European top-tier level, FIBA SuproLeague competition but his basketball playing career ended prematurely, due to a rare health situation that almost left him paralyzed and forced him to quit at the age of just 23 years old. 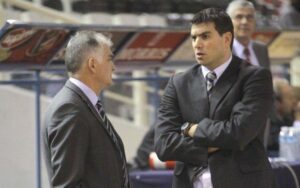 Haris immediately turned to coaching, becoming an assistant coach for his father, longtime head coach Soulis Markopoulos with PAOK B.C. and Aris B.C. before taking over as a head coach of Koroivos B.C. of the Greek Basket League club from 2014 until 2016 and then A.E. Doxa Lefkadas with great success.
Markopoulos moved on to the Chinese Basketball Association in 2017 becoming the assistant coach for the Beijing Ducks who were lead by fellow Greek coach Yannis Christopoulos. The Ducks have been one of the top-tier teams in China in recent years and Haris had the chance to coach Chinese superstar Jeremy Lin as well as former NBAers Justin Hamilton and Jordan McRae the last couple seasons.

2x EuroLeague champion and 2005 EuroBasket winner Nikos Chatzivrettas talks to Vassilis Skountis in a rare interview at "The Show" where the former professional opens up about his long basketball...

END_OF_DOCUMENT_TOKEN_TO_BE_REPLACED

The parade of Olympians doesn’t stop at “The Show” by Trace ‘N Chase and we were very honored to host the 1992 Olympic Gold Medalist in 100 m hurdles Mrs....

END_OF_DOCUMENT_TOKEN_TO_BE_REPLACED

“The Show” with “The Voice” Vangelis Ioannou

In another special episode of "The Show", Vassilis Skountis seizes the opportunity to talk all things basketball and more with sports journalist Vangelis Ioannou who is not shy about some...

END_OF_DOCUMENT_TOKEN_TO_BE_REPLACED

The history of sports and basketball in Thessaloniki goes many years back and Vassilis Skountis is honored to host Anna Mavroskoufi, daughter of Symeon Mavroskoufis, the first Greek National to...

END_OF_DOCUMENT_TOKEN_TO_BE_REPLACED

“The Show” with Ultrarunner Marios Giannakou

Life Coach, Motivational Speaker and Ultrarunner Marios Giannakou is featured in the latest episode of "The Show" fresh off completing the “Lapland Arctic Ultra", a 500 km (310 mile) race...

END_OF_DOCUMENT_TOKEN_TO_BE_REPLACED

“The Show” with George Aivazoglou, Head of Fan Engagement & DTC in Europe & Middle East for the NBA

The NBA Finals are here and we are excited to host George Aivazoglou, the Head of Fan Engagement & DTC in Europe & Middle East for the NBA who talks...

END_OF_DOCUMENT_TOKEN_TO_BE_REPLACED

Ahead of the biggest soccer game of the season, the UEFA Champions League, we celebrate this special event with the one and only Christos Sotirakopoulos, a longtime sportscaster who has attended...

END_OF_DOCUMENT_TOKEN_TO_BE_REPLACED

The Greek version of the “Dream Team” is being hosted in another episode of “The Show” where Vassilis Skountis discusses the triumph of the U-19 undefeated Greek National Team of...

END_OF_DOCUMENT_TOKEN_TO_BE_REPLACED

In Episode 9 of the YouTube Series “The Lost Tapes”, powered by Stoiximan, Vassilis Skountis brings back the memories with Vlado Jankovic, together with a very special cameo by Greek...

END_OF_DOCUMENT_TOKEN_TO_BE_REPLACED

Trace ‘N Chase successfully attended the three-day celebration for the 90th anniversary of the founding of FIBA ​​at the National Sports Center in Heraklion (Lido), co-organized by the Hellenic Basketball...

END_OF_DOCUMENT_TOKEN_TO_BE_REPLACED

Coach Joseph Nikolaidis together with young athletes from DEKA Sports Academy (10A), one of the most successful and fast growing programs in Greece, housed in a privately owned gym-training center...

END_OF_DOCUMENT_TOKEN_TO_BE_REPLACED

No Coupons, No Extra Typing… Your hustle-free discount is automatically applied at checkout!!! Dismiss

Manage Cookie Consent
This site uses cookies and other tracking technologies to assist with navigation and your ability to provide feedback, analyze your use of our products and services, assist with our promotional and marketing efforts,
Manage options Manage services Manage vendors Read more about these purposes
Preferences
{title} {title} {title}