George Maslarinos, one of the very first Europeans that took advantage of the Bosman ruling that allowed athletes to move to a new club at the end of their contract without their old club receiving a fee, spend a few hours at Trace ‘N Chase last week.
Born in 1974 in Sweden, he started his basketball career at the age of nine with VAO Sports Club, before playing for Aris B.C. and then moving to Fulgor Libertas Forli in Italy where he had the chance to practice together with legendary NBA big man Manute Bol. 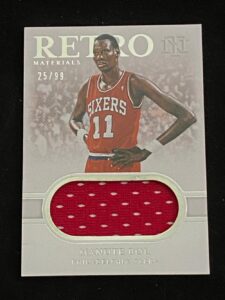 He then returned to Greece and signed with PAOK B.C. where he won the Greek Cup in 1999. His next stop was with Marousi B.C. where, under the guidance of Coach Vagelis Alexandris he won the Saporta Cup (currently EuroCup) in 2001. His success led to Greek powerhouse Panathinaikos B.C. signing him to a deal and he won the Greek Championship in 2004 before closing out his career with Panellinios B.C., ICBS and Ermis Lagada Basketball. A member of all Greek youth teams, he won the silver medal at the 1991 FIBA Europe U-16 Championship and the fourth place in the FIBA Europe U-18 Championship in 1992.

A former vice president of the Panhellenic Association of Paid Basketball Players (PSAK), Maslarinos graduated from the Department of Physical Education and Sports Science of the Aristotle University of Thessaloniki, specializing in Basketball. In 2010, he founded the HOOP Education Club of Sports, an athletic club for young athletes playing basketball and volley. The most modern basketball school in Northern Greece, HOOP is an official partner of the FIBA ​​World Basketball Federation since March 2013 and has organized 20 tournaments in which more than 2000 athletes have participated so far!