Haris Papageorgiou, along with former professional basketball player and current coach Nikos Chasopoulos and former Iraklis B.C. guard and current Vice President of EKASTH Giannis Tsoumis, stopped by Trace ‘N Chase this week, talking extensively about the revolution of basketball and the globalization of the sport in recent years.

One of the most charismatic scorers in the history of Greek Basketball, Haris Papageorgiou was a natural-born scorer who terrorized opponents for over 20 years, primarily with the “Emperor of Greek Basketball”, Aris B.C.
He started his career all the way back in 1965 with local basketball club Anagennisi and then moved on to Aris in 1971, finishing as the third scorer of Division I in 1973 and the second overall in 1975, while finally leading the league in scoring in 1976 as well as in 1979 when he also won the first of his four Greek Championships with Aris, averaging an astonishing close to 40 points while developing into a defensive force on the other side of the ball.
A member of the Greek National Team also, he played in 82 games with Greece and scored 886 points (10.8 points per), while participating at the 1973, 1979 and the 1981 EuroBasket.

After the end of his athletic career, he has been equally active off the basketball court becoming the President and CEO of Aris B.C. in 2018, a position he holds until today. 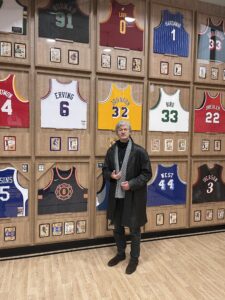